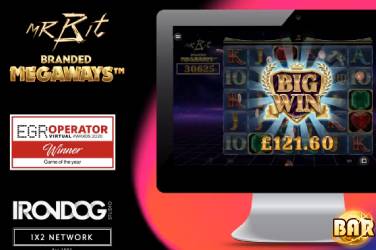 The annual “Oscars” of the e-gaming industry EGR Awards, which for the first year were broadcast only on the Internet on November 11 and 12, 2020, announced a very interesting winner in the casino game category of the year. The Branded Megaways slot machine of the notorious developer Iron Dog Studio was announced as such.

The idea of this slot is to serve as a template, allowing casinos to customize the game with the help of the Iron Dog Studio team. For example, one of our partners MrBit recently released a version of Branded Megaways with its company logo, whichyou can try for free on their site MrBit.com.

The choice is of course justified by the easy adaptation of the game to the needs of online casinos, not so much by its qualities. The others awarded with encouragement and recommendation are the live casino game of Evolution – Crazy Time and the slot game Money Train 2 of Relax Gaming, which have really aroused serious interest and are on the front pages of many casinos in Europe.

Let us remind you that among the other nominees are the following slots games:

, most of which of course you can try completely free on our site.